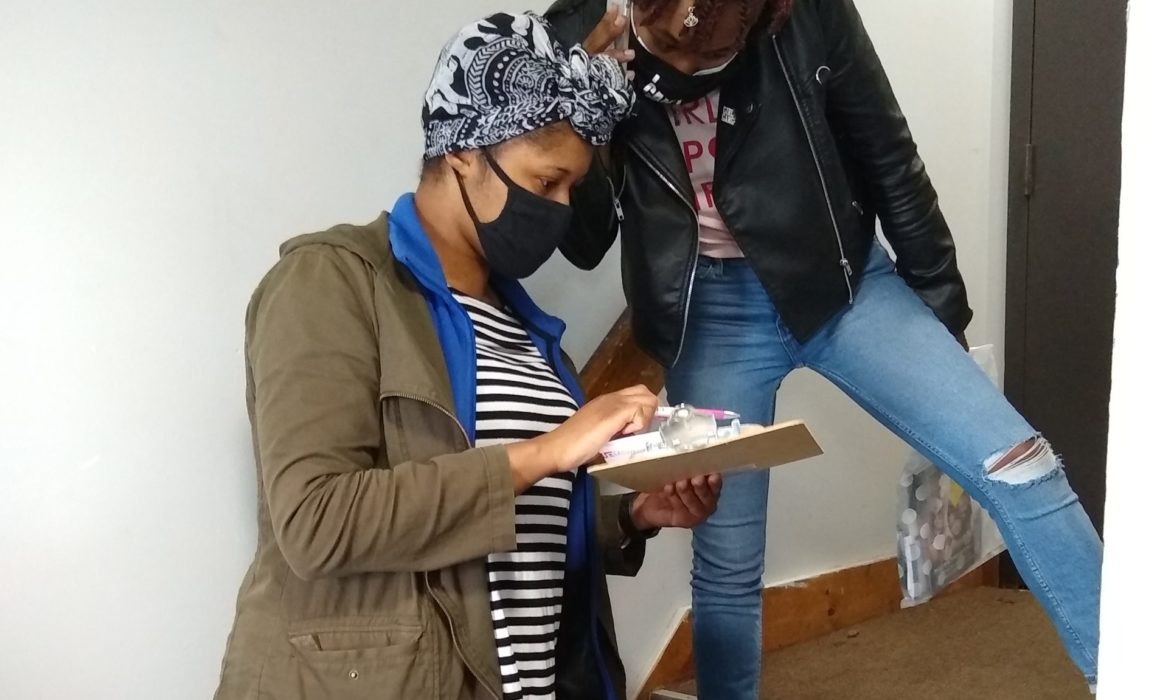 Despite visiting addresses where the students no longer lived, being told they had the wrong apartment when they were right and encountering people unwilling to open their doors, two Blue Hills Civic Association (BHCA) staff members going door-to-door to reach Hartford Public Schools (HPS) seniors approached each new prospect with enthusiasm.

BHCA and the Center for Latino Progress (CLP) have been working to reach HPS seniors who lack a post-secondary plan for work, college or the military after graduation. Since some students have opted to learn from home as the pandemic continues, HPS guidance counselors have faced more challenges than ever to connect with some disengaged students. At Weaver High School, two guidance counselors serve 600 students; and at Hartford Public High School, four guidance counselors serve 900 students, said Reneesha Baugh, community organizer, BHCA. “It’s an uphill battle for us all,” she said.

This is where the BHCA’s Baugh and Andriana Milner, youth development specialist, come in. Armed with a list of names, addresses, phone numbers, goodie bags with candy and information and a determination to help students, they and other staff members go out in teams several afternoons a week. They start by knocking on doors or ringing doorbells. If they get no answer, Milner calls the student’s number while standing outside their home.

“Hi, I’m Andriana with the Blue Hills Civic Association. We have an opportunity for you to earn some money through an internship and a summer job,” she says to the answering machine or person on the line. If they don’t reach anyone, they may leave a goodie bag with information about the program, a registration form and a zippered bag containing candy and Baugh’s business card.

For more than two hours on a Friday afternoon, they encountered no answer at most doors, an outdated address at one house and someone who said they had the wrong apartment but who answered the phone and confirmed they had the right address. (The young man wouldn’t come to the door, but the women left the goodie bag in front of his mailbox.) Some addresses and phone numbers don’t exist at all, which wastes valuable time. Despite traveling in pairs, outreach workers pay attention to their surroundings and avoid entering buildings that feel unsafe. Even with all the roadblocks the outreach workers face to connecting with students, they’re undeterred.

“At least they’ll get all the information,” said Milner, who was sporting a “Girls Support Girls” t-shirt this day.

An undocumented student who didn’t come to the door but answered Milner’s call said she was interested, and wondered if she was eligible to participate without a green card. (She was.) Milner told her she’d text her and email her the information about the program. That girl sounded interested.

As they left that South End house adorned with Mickey Mouse decorations, Milner crowed, “Oh my god, YES. That’s one!”

After several stops with no face-to-face meetings, they talked about what kept them going in the face of so many apparent dead ends. “It’s an important opportunity for them, even if they don’t realize it,” Milner said. They’re job has transitioned from information providers to saleswomen. On a recent afternoon, BHCA turned three students who initially said ‘no’ into students who said ‘yes.’

“I had adults in my life who had to push me,” Baugh said. “Hopefully, they just need this little push” to
learn some skills.

After driving from one apartment and house to another, Milner called and reached the mother of a boy who was the last name on the day’s list. Her son was home, she said, and encouraged Milner to try the apartment door. The boy didn’t answer the buzzer, but as Milner and Baugh stood outside the apartment building discussing whether to leave a goodie bag on the front porch, a resident left and they slipped into the apartment building through the open door. After walking up three flights of stairs, they rang the bell and a boy opened the door part way. He looked cautious, until Milner introduced herself and Baugh quickly.

When she told the senior he could get a job and earn up to $1,500, along with a $50 gift card just for signing up, he revealed a small smile. Along with the bag containing the sign-up information, Milner gave him a $10 gift card for answering the door. When his face lit up with an even bigger smile, she handed him a gift card for his mother, since she had been helpful when Milner called.

Outside the apartment, Milner did a brief happy dance, saying, “Got one!” She’d follow up with a phone
call on Monday, she said.

This was a typical day, and they don’t get discouraged, they said, because they know how hard a year it has been for the Class of 2021; if they reach one student, it’s worth it. “Some are so disinterested in school” that the offer to earn money makes a difference, Baugh said. “We’re passionate about making sure these seniors have this opportunity so they don’t become another statistic. Their success is our success.”